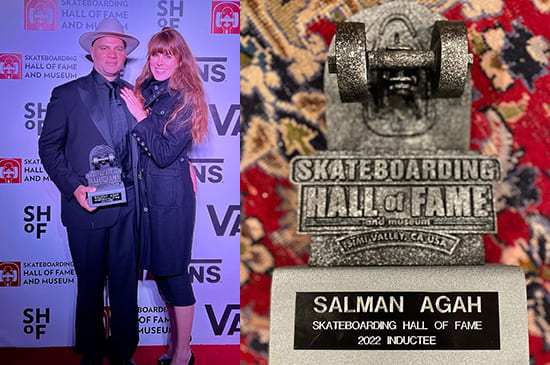 From amateur to a professional skateboarder, Salman Agah worked hard to be one of the most respected skate legends in the history of skateboarding.

After his life of professional skateboarding, the 50-year-old started his business opportunity Pizza Nista from the ground up to provide the tastiest pizza to the mass and still supported the skate scene.

During his career as a pro skater, Agah has made significant contributions to the skateboard world's progression, explicitly pioneering switch stance, which is riding opposite of your regular stance — the skateboarding equivalent of ambidexterity.

Agah said. "First of all I'd like to thank The Skateboarding Hall of Fame & Todd Huber for this honor & all of you for being here especially my sisters Myra, Ameena and my Mother Annie Agah who taught me to always be positive and to do everything joyfully even when you don't feel like it."

"I hope you all get to say hi to her tonight! I'd like to thank all the skateboarders that preceded me, those from my era & those that have come after my era. I'd like to thank my sponsors that supported me the past 30 years." He said. "I've made a lot of friends and I'm grateful for all the times we had and for the time we'll share in the future. It means a great deal to me to be recognized and distinguished by you all tonight. Thank You!"

"In 1977 I was 5. I got my first skateboard in Oceancity, MD on the boardwalk. It was red plastic with bright clear red wheels." Agah explained. "I loved it! At the time as a single father my dad hardly ever let me ride it because he didn't want to deal with my getting hurt & thought it was too dangerous."

He added. "But one day my baby sitter Wanda who was a beautiful young woman with a big afro and bell bottom jeans who I thought was so cool took the boards down out of the top shelf of the closet and rode them with my brother and I. She liked to have fun and we had a blast bombing little hills and riding over speed bumps. Not long after we started riding them we lost them down the sewer drain in the rain. Gone forever! I was heartbroken, but more importantly I was obsessed! Or was it possessed?"

"When I was coming up becoming part of this tribe or group was a treacherous journey without a clear path, with many pitfalls, with many unknowable and unspoken taboos along with no clear advantage for prominence in any respect nor to any claims on what society calls the trappings of success," Agah said.

He continued. "I skated because I loved it then as I do now. Most adults and even many people my own age saw my passion and focus as Kooky, misguided and a very likely dead end and that could have been the case as far as I was concerned because skateboarding wasn't something I would or could ever give up."

Agah explained. "Skateboarding introduced me to my beautiful wife, my best self, Joan (who I met in the early 90's at and event at Powell Peralta's Skate Zone). Skateboarding taught me a great deal about how to communicate to and more importantly how to listen to my kids Zephyr & Sabbath."

"As many of you will agree, wealth to us can only be measured by the absence of overseers and liberty from the dictates of time and of space." He said. "Skateboarding spoiled me with those riches, (& the freedom to be myself, and to associate with whoever I please, to do as I please all the time, in my own time, at my own pace), which I cherish to this day."

"Lastly I'd like to thank my Father who everyone know's as Agah who couldn't be here tonight due to health reasons. The simple fact that he moved us to northern California in 1980 put me in the epicenter of a massive skate scene unbeknownst to me at that time." Agah said. "When he told me we're moving to California from Washington DC, I asked him why. He said, because there's more opportunity" I think he was right. And the weather is much better too, I'm sure you will agree."

"Due to the enormous number of individuals and skaters that have influenced me on my journey I must refrain from naming them all tonight, but want to extend my sincerest gratitude to all of them and you and look forward to skating and making more memories together in the future," Agah said.