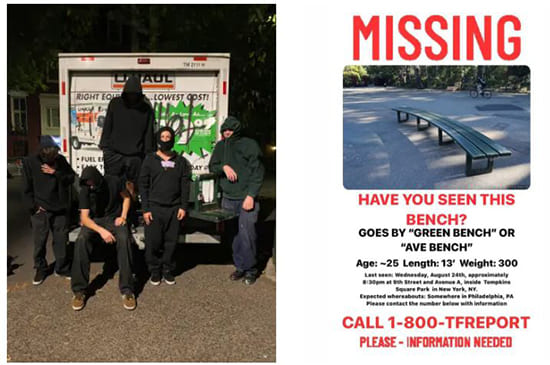 The Philly Vs. NYC skateboarders' rivalry is getting downright fugly as a group of skaters from Philadelphia ignited a turf war with their counterparts in Manhattan last month by stealing the iconic green bench obstacle or the AVE bench from Tompkins Square Park.

Tompkins Flatground Instagram account posted. "Some reports have said the green bench was stolen from Tompkins around 2 am on early Thursday morning, to which it was carried into a van by several unidentified men and transported across state lines to Philadelphia, PA."

The 300-pound piece of steel street skateboarding obstacle has become one of the most storied objects to skate around and on, and its arrival on the East Coast adds a coda to a two-decade saga of discovery, theft, loss, reconstruction, and a particularly hard-won switch backside noseblunt slide across its 13-foot arc.

In an interview with Quartersnacks, professional skateboarder Anthony Van Engelen said, "It's such a gratifying feeling to skate a curve and then to have the smoothness of metal, and with the length of it, most skaters, they would be dying to skate something like that."

In October last year, AVE brought the bench to New York when FA World Entertainment opened a store in the East Village. Unfortunately, the green bench got stolen again.

According to skate videographer Harry Bergenfield's Instagram post, six drove a UHAUL up to Tompkins in the dead and posted the obstacle on their local spot.

The bench was moved a few days later to Cecil B. Moore Station Plaza, outside of Temple University, to add another skateable object to the flatground space. It has been a hit among local skaters since.

“It’d be hilarious if that thing makes its way on an airplane sometime to Europe or something and comes back here,” AVE said. “The more ridiculous it gets, to me, it’s funny and entertaining.”