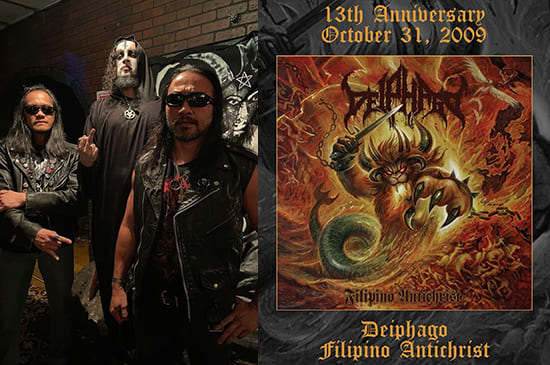 Since 1991, the legendary Filipino black metal masters Deiphago has been killing it in the Philippine underworld until they became war metal icons in Costa Rica.

With all the bloodshed, satanism, chaos, blasphemy, occultism, and death, the band Celebrates the 13th Anniversary of the Filipino Antichrist album.

Their album received a 5/6 rating on issue #30 of Zero Tolerance Magazine (July/Aug 2009), winning that issue's coveted "RELEASE OF THE ISSUE."

The band wrote. "The ultimate annihilation in audio torture is now at hand! In this time of over-saturated bestial metal, Deiphago blaze their own barbaric trail of Satanic Metal with the most punishing, primitive & bestial attack of 2009!

"With a background of demo tapes throughout the 90's & their debut full-length Satanik Eon, the Filipino Antichrists succeed in making this hi-speed attack even more rewarding than before." They added. "No wannabe Fallen Angel Of Doom, no wannabe The Oath Of Black Blood, no Angelcunt or even War Cult Supremacy. Just pure, uncompromising, unconventional violence: this is bestiality. Deiphago are the true beasts. Fuck off to the false!"