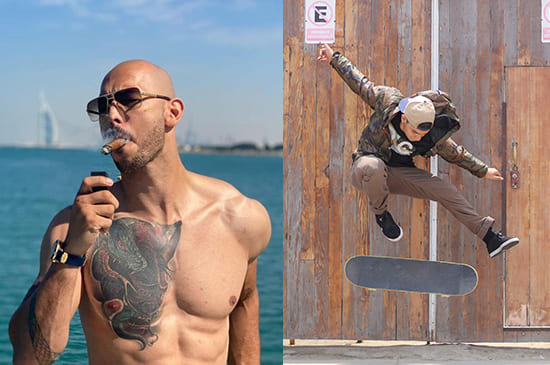 According to the 4x kickboxing world champion and multi-millionaire Andrew Emory Tate III, his unmatched perspicacity, coupled with his sheer indefatigability, makes him a feared opponent in any realm of human endeavor.

The famous old saying of his father becomes his axiom now since he is the older Tate in the family.

Consequently, Top G claimed that he would win a skateboarding competition to dominate everyone, even though he admitted that he had never stepped on a skateboard.

Although he would never win with professional skateboarders or even in the women's category, the most canceled man on the planet still thinks he is the best at everything.

"If someone came up to you and said, 'you have to have a skateboard in competition but don't worry, but the guy you're skateboarding against can't skateboard,'" Tate said. "Cool, but I turned up, and other parties would be like 'shit.'"

He added. "I can't even skateboard, but the party would be like, 'ah Tate, oh this guy.' You know I'm just that guy. I'm just good at stuff, and no one wants to compete with me at anything."

In a podcast interview of The Ahmad Mahmood Show, Tate also said that as a man, you need to work hard, stop being soft and suffer to become immune to hardship, as it will bring rewards to success in the future.

Just like the Baker professional skateboarder Dustin Dollin, who thinks skateboarding has gotten soft these days - made the new generation welcomed everyone like pre-school and also made it easy for kooks to slip in.

As for the Top G himself, the 13-year-old contest girl skater Shilo Catori can beat him anytime in a skateboarding contest as she has been skating for many years, and Tate has never skated in his life.